SUMMARY: Genetic variants in the SCN1A and PCDH7 genes may influence the risk of epilepsy.

DESCRIPTION: Epilepsy is a condition that causes unpredictable seizures and other health problems. This study looked at patients with general as well as specific types of epilepsy (focal and unclassified) to determine which genetic variants are linked to the disease. After examining 34,853 individuals of European, Asian, or African ancestry, the most significant variants were identified as being located in the SCN1A and PCDH7 genes. SCN1A encodes for a subunit of voltage-dependent sodium channels. These membrane proteins allow sodium to flow into the cell, which is essential for the activity of muscle cells and neurons. The PCDH7 gene encodes a protein that is thought to play a role in cell-cell recognition and adhesion.

DID YOU KNOW? To reduce your risk of developing epilepsy, try to prevent traumatic brain injuries, get vaccinated, and lower your chances of stroke and heart disease by eating healthily and exercising regularly. [SOURCE]

Epilepsy, sometimes still called cerebral seizure disorder or cerebral spasm disorder, refers to a neurological disorder with at least one spontaneously occurring epileptic seizure. There is currently no existing identifiable cause (such as an acute inflammation of the brain, a stroke or brain injury/head injury) or trigger (such as withdrawal of alcohol in the case of existing alcohol dependency or massive sleep deprivation). The Epilepsy Foundation is a non-profit aimed to help people with epilepsy.

A prerequisite for diagnosis after a seizure is a recognizably high risk of recurrent seizures, otherwise epilepsy is, by definition, only present after two seizures at least 24 hours apart. An epileptic seizure is a consequence of sudden, synchronous electrical discharges of nerve cells (neuron groups) in the brain, which lead to involuntary stereotypical movement or mental health disorders. 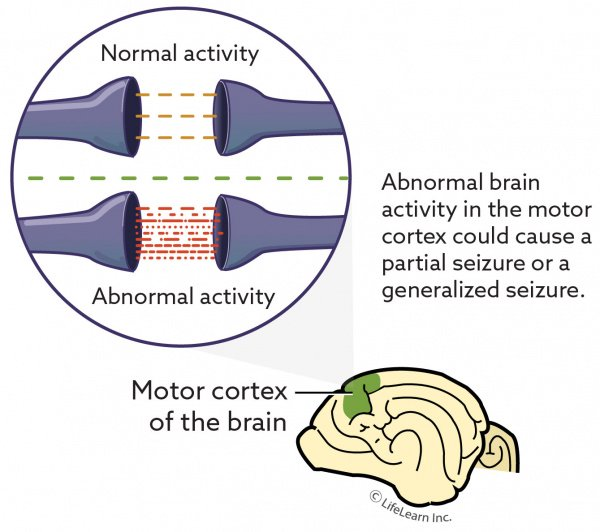 Normal vs. abnormal neuronal activity in the brain, Source

For diagnosis, the medical history of people with epilepsy is taken with the help of the affected person as well as relatives or third parties who have observed seizures. Typically, an electroencephalogram (EEG; “brain current curve”) is performed. Imaging is usually part of routine diagnostics, while more specialized procedures are reserved for special questions.

Treatment initially consists of the administration of seizure suppressing drugs (anticonvulsants). In therapy-resistant cases, other methods such as epilepsy surgery are also used.

Epilepsy has a variety of effects on the daily life of the affected person (such as suitability for certain professions or driving a car), which must also be taken into account in the treatment.

The prevalence of active epilepsy cases in childhood is again age-dependent at 3-6/1000 children. In early childhood, epilepsy with generalized seizures predominate, while in adulthood epilepsy with focal seizures dominate.

Although knowledge about the development of epilepsy has increased significantly in recent decades, much is still unknown. The occurrence of epileptic seizures is caused by the over-excitability of nerve cells, and abnormal brain electrical activity of larger nerve cell assemblies. It is therefore assumed that an imbalance of excitation and inhibition in these neural networks leads to epileptic seizures.

Increased excitation or decreased inhibition of can be caused both by changes in the membrane properties of the nerve stimulator cells, and in the transmission of excitation from nerve cell to nerve cell by neurotransmitters. For example, defects in the ion channels for sodium and calcium ions can participate in the generation and propagation of seizure discharges. The amino acids glutamate and aspartate are involved as excitatory neurotransmitters. These open ion channels by binding to NMDA or AMPA receptors. 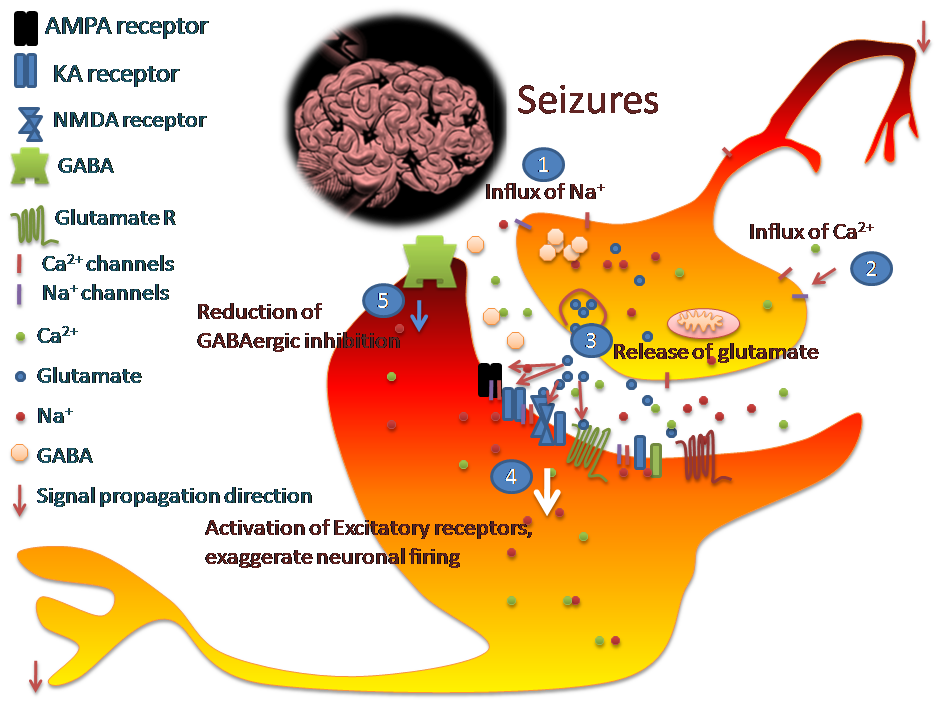 Gamma-aminobutyric acid (GABA), as an inhibitory transmitter, is the antagonist. Defects in biosynthesis, increased degradation, or inhibition of the GABA receptors can also contribute to the seizure process. Electrolyte imbalances due to continued excitation of inhibitory GABA-using synapses can turn these synapses into excitable synapses (Kandel, 2001). The centrally inhibitory effect of some neuropeptides, such as neuropeptide Y and galanin, is discussed as an endogenous mechanism for preventing epileptic seizures.

The mechanisms that lead to the development of epilepsy from individual seizures are far more complex and still unknown. Since the majority of seizures remain single events, they do not necessarily appear to cause epileptic changes.

In a few cases, pedigrees and molecular genetic studies have revealed not only a mode of inheritance, but even a gene locus for the mutated genes. An overview of genetic factors is given in the table which indicate the risk of inheriting epilepsy. For example, voltage-dependent channels for sodium ions or receptors of neurotransmitters could be identified as mutated gene products [6].

In addition, epilepsy can also occur in diseases that are based on a change in the genetic make-up. In these cases, the seizure is only a symptom of the disease. Examples are tuberous sclerosis or Angelman syndrome.

As with all other diseases, the diagnosis begins with the collection of the medical history. In epilepsy patients, special attention should be paid not only to family history of epilepsy and other diseases of the nervous system, but also to previous illnesses that may cause symptomatic epilepsy. These include disorders and increased risk to women with epilepsy during pregnancy, problems during childbirth leading to oxygen deficiency, accidents with craniocerebral trauma (brain conditions) or inflammatory diseases of the central nervous system.

This is followed by a physical examination, especially of the nervous system, with examination of strength, feeling (sensitivity), reflexes, cranial nerve function, balance and coordination.

Laboratory tests from the blood are also used to identify possible causes of symptomatic epileptic seizures (such as hypoglycaemia or mineral deficiency). The treating physician monitors the amount of the drug in the blood (drug level or therapy level) as well as possible side effects (blood count with platelets, liver enzymes, kidney function, blood clotting, calcium-phosphate metabolism) under drug therapy.

In severe cases, Status epilepticus can occur. This is when seizure lasts longer than 5 minutes or seizures occur so close together that the patient cannot recover.

Seizure pattern in the EEG typical for an absence epilepsy

Electroencephalography (EEG) can directly indicate the readiness of the brain for epileptic discharges. In this case, a cap is placed on the patient with electrodes at defined intervals, from which the electrical surface activity of the cerebral cortex is derived via an AC voltage amplifier. In the context of initial diagnosis, the EEG is mainly used to classify the seizure or epilepsy, and to localize the focus in the case of focal seizures.

In contrast, magnetoencephalography (MEG) derives the magnetic activity of the brain with high temporal and spatial resolution. However, this is a very complex, expensive and new method, which serves above all for the exact localization of brain areas causing epilepsy.

Cerebral computed tomography (CCT) is a special x-ray layer examination and was the first imaging method to detect triggering coarse changes in brain tissue. Its advantages lie in its rapid availability and cost-effectiveness. However, since its resolution of tissue changes in the brain is inferior to other methods, it has also lost importance due to the radiation exposure associated with it.

In magnetic resonance imaging (MRI or MRI), images are generated by alternating, strong magnetic fields. The image has a significantly higher resolution and a better contrast between grey and white matter. Functional magnetic resonance imaging (fMRI) is available for special problems, especially in pre-surgical diagnostics, with which specific brain functions can be assigned to the corresponding cortical areas.

The aim of treatment for epilepsy is to achieve complete freedom from seizures with as little side effects as possible. People close to the patient should be proficient in seizure first aid. In children, the therapy is also intended to ensure unimpaired development. All patients are given a lifestyle that does justice to their abilities and talents. A distinction must be made between the acute treatment of an epileptic seizure and permanent treatment. This also is dependent on the type of seizure.

These therapeutic goals are primarily achieved by appropriate drug treatment and clinical trials. With the help of monotherapy with carbamazepine, eslicarbazepine acetate, lamotrigine, levetiracetam, oxcarbazepine, valproic acid or another anticonvulsant, it is possible to control seizures in about two thirds of cases.

The remaining patients are referred to as drug-resistant epilepsy. Although the additional use of further antiepileptic drugs (add-on therapy) rarely leads to permanent seizure-free survival in pharmacoresistant epilepsy patients (about 10 percent), partial seizure successes, such as a reduced seizure frequency or milder forms of seizures, can be achieved. Treatment with ketogenic diet has also been shown to help.

Pharmacoresistant epilepsy patients should also be examined at an early stage to determine whether they are suitable candidates for epilepsy surgery. Epilepsy surgery has the potential to “cure” epilepsy in pharmacoresistant focal epilepsies if the epileptogenic area in the brain can be precisely identified and is operable. The chance of seizure-free epilepsy surgery is 50-80 percent, depending on the constellation of findings.

The United States National Institute of Neuorological Disorders and Stroke has many resources for patients, as well as the Center for Disease Control and Prevention.